The Museum of Domestic Design & Architecture 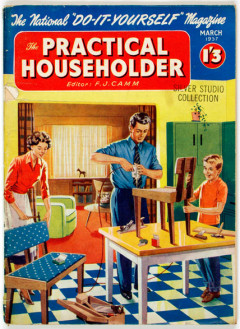 MoDA holds a number of separate collections, which form an outstanding resource for the study of domestic interiors, domesticity, household management, and the design & decoration of ‘ordinary’ homes. A core collection at MoDA is The Silver Studio Collection, consisting of an archive of one of Britain’s leading commercial design studios active between 1880 and 1963. The Silver Studio responded to the fashions and tastes of the period including styles such as the flat stylised Art Nouveau & pattern design in the English home between 1880 and 1960. The Collection contains over 40,000 original designs on paper, 5,000 wallpaper samples, 5,000 textile samples and the Studio’s working records. 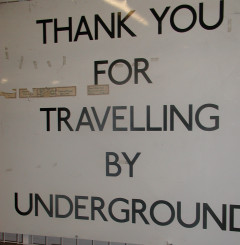 A vital part of London’s success was the transport system that developed alongside the Capital in the 19th and 20th centuries-truly the lifeblood of this great city. London Underground carries more than three million passengers a day. The numbers are rising: one billion passenger journeys were recorded in a 12-month period for the first time ever in 2006/7.  Providing a safe and comfortable travelling environment for so many people is an enormous challenge to planners and operators of the network. ‘Understanding the Underground’ is an interactive space in the Museum where you can find out more about how the Tube works: drive a train, explore the map, help other customers and check out the safety systems.

The Design Museum
The Design Museum London is one of the world’s leading museums devoted to contemporary design in every form from furniture to graphics, and architecture to industrial design.

The Science Museum was founded in 1857 with objects shown at the Great Exhibition held in the Crystal Palace. Today the Museum is world renowned for its historic collections, awe-inspiring galleries and inspirational exhibitions.

The Cartoon Museum is a London museum for British cartoons, caricatures, comic strips and animation. It has a library of over 5000 books and 4,000 comics relating to the subject. The museum issues catalogues and features a changing display of over 250 exhibits from its collection of over 1700 original cartoons and prints.
35 Little Russell Street, London WC1A 2HH , England 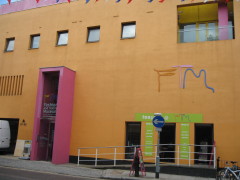 The Fashion and Textile Museum is a cutting edge centre for contemporary fashion, textiles and jewellery in London. Founded by iconic British designer Zandra Rhodes, the centre showcases a programme of changing exhibitions exploring elements of fashion, textile and jewellery as well as the Academy which runs courses for creative students and businesses, and the fabulous The Café @ FTM.

The Cuming Museum is the home of the worldwide collection of the Cuming Family and the museum of Southwark’s history. It houses a diverse collection that includes archaeology, ethnography, social history and natural history. A mix of permanent and changing exhibitions tells the story of the Cuming family and the history of Southwark, from Roman times to the diverse communities of today. Opened to the public in 1906, the Cuming Museum is the result of over 100 years of collecting by father and son, Richard and Henry Cuming.

THE DE MORGAN FOUNDATION owns an unparalleled collection of the work of William De Morgan the Ceramicist and his wife Evelyn De Morgan the painter. Both were highly esteemed in their day- the late 19thand early 20thCentury and were key participants at the beginning of the Arts and Crafts Movement

The Churchill Museum, the world’s first major museum dedicated to the life of Winston Churchill, is a permanent exhibition housed within the unique setting of the historic Cabinet War Rooms. Shortly after becoming Prime Minister in May 1940, Winston Churchill visited the Cabinet War Rooms to see for himself what preparations had been made to allow him and his War Cabinet to continue working throughout the expected air raids on London. It was there, in the underground Cabinet Room, he announced ‘This is the room from which I will direct the war’.

Leighton House Museum is the former studio-house of the great Victorian artist Frederic, Lord Leighton (1830-1896).  The house is exceptionally beautiful and famous for the Arab Hall.  It is located on the edge of London’s Holland Park – just off Kensington High Street.  Refurbishment and restoration of the historic house is  now complete, funded by The Royal Borough of Kensington and Chelsea.  The house is now open to the public. 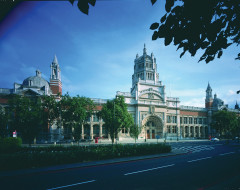 If you are an art and design devotee, the V&A South Kensington is for you. Unquestionably this is one of the world’s greatest museums. The new British Galleries opened at the end of November 2001 and offer displays of the very best of historic British furniture, textiles, dress, ceramics, glass, jewellery, silver, prints, paintings and sculpture. Applied art and design collections are unrivalled in their scope and diversity. Discover 3000 years’ worth of amazing artifacts from many of the world’s richest cultures including ceramics, furniture, fashion, glass, jewellery, metalwork, photographs, sculpture, textiles, wallpapers and paintings. Visitors will marvel at the remarkable interiors of this vast architectural treasure. The Madejski Garden in the Italianate courtyard opened on 5 July 2005 and is a stylish, elegant place to meet. It provides a central point from which to explore the museum.  On dry days, take your food from the newly expanded café/restaurant outside and relax in this unique setting.

Sir John Soane was one of England’s most influential & original architects.  His beautiful Georgian terrace was bequeathed to the nation in 1823. Visitors are amazed by of collections of antiquities, picture rooms & much more.  The complete series of Hogarth’s A Rake’s Progress is one of its many attractions.
Address: 13 Lincoln’s Inn Fields,  London WC2A 3BP.  Open: Tuesday to Saturday.  10.00 – 17.00. First Tuesday of the Month open late from18.00 – 21.00. Admission- Free

The National Gallery looks out over Trafalgar Square in the very heart of London. It houses a permanent collection of Western European paintings dating from about 1250 onwards. The entire National Gallery permanent collection and long-term loans are illustrated and described in the collection online. But don’t just surf the website. The wealth of art housed here calls on visitors to make many visits. General entry is free but some temporary exhibitions charge entrance fees.

The Imperial War Museum has an unparalleled collection covering all aspects of twentieth and twenty-first century conflict involving Britain and the Commonwealth.   It illustrates and records all aspects of modern war, and of the individual’s experience of war, whether allied or enemy, service or civilian, military or political, social or cultural. Its rôle embraces the causes, course and consequences of conflict and it has an essentially educational purpose. The Museum’s five branches include Imperial War Museum London which houses the award-winning Holocaust exhibition; the Second World War cruiser HMS Belfast; the Churchill Museum and Cabinet War Rooms, housed in Churchill’s secret headquarters below Whitehall; Imperial War Museum Duxford, a world-renowned aviation and heritage complex, and Imperial War Museum North.

The Museum of London

Museum of London is one of the largest urban museums in the world. It is currently redeveloping its lower galleries to retell the story of London and Londoners from 1666 to the present day. The £20.5 million project will revitalize the galleries and create a glass window overlooking London Wall. The new galleries will open in spring 2010 with significantly increased access to the Museum’s collections, both in the galleries and online, and will also include a new Clore Learning Centre, a theatre and The Sackler Hall containing an information and coffee point. Find out more about supporting this project at www.museumoflondon.org.uk

The Jewish Museum is a cultural and educational resource of national and international importance.  It houses outstanding collections & organises a lively programme of exhibitions. It aims to explore & preserve Jewish heritage, celebrate diversity & challenge prejuice.

The Wallace Collection is a national museum in an historic London town house. In 25 galleries are unsurpassed displays of French 18th century painting, furniture and porcelain with superb Old Master paintings and a world class armoury. A magnificent collection of princely arms and armour is shown in four galleries and there are further important displays of gold boxes, miniatures, sculpture and Medieval and Rennaissance works of art. The Wallace Collection announces plans for new Dutch galleries, complementing the dramatic programme of room refurbishment and gallery improvements under Director, Dame Rosalind Savill, who retires in September 2011.

The Geffrye Museum displays a chronological sequence of period rooms showing English urban middle-class interiors.  The museum interprets its collections of decorative and fine arts within a social historical framework.  Housed in a former almshouse, it features period gardens.

An Act of Parliament establishing the British Museum received the royal assent on 7 June 1753. Today the British Museum holds in trust for the nation and the world a collection of art and antiquities from ancient and living cultures. General entry is free but some temporary exhibitions charge entrance fees. The recently opened Great Court designed by Sir Norman Foster welcomes visitors, houses the famous Reading Room, shops, cafés, a balcony restaurant. A ‘must visit’ museum – Do give some thought to whether you think the Elgin Marbles should be returned to Greece.