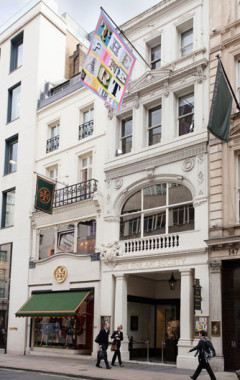 The Fine Art Society is one of the world’s oldest art galleries, with premises in both London and Edinburgh. The company specializes in British art and design from the 17th to the 21st centuries and has traded from 148 New Bond Street, London, since its foundation in 1876. The New Bond Street gallery was totally refurbished in 2004-5 and the New Gallery created to show work by contemporary artists.

Our gallery is revolutionising the way art is sold. We aim to make art more accessible by being as approachable and affordable as possible. We have changing thematic exhibitions in the main gallery space and you can also browse through our extensive storerooms where we keep work by up to 70 other artists in stock.
Life in the City – People & Places.   Our most popular exhibition returns this autumn 2008, featuring six artists exploring aspects of urban dwelling in the diverse mediums of painting, ceramics, screenprinting, etching & needle work.

Discover the life and works of Britain’s most inspiring
designer at the newly-refurbished William Morris Gallery
in Walthamstow, London. Explore the beautiful new
exhibitions, take part in hands-on family activities,
or relax in the stylish Tea Room with views over
the recently redeveloped Lloyd Park.

Serpentine Gallery is one of London’s best-loved galleries for modern and contemporary art. Its Exhibition, Architecture, Education and Public Programmes attract approximately 750,000 visitors a year and admission is free. The Serpentine Gallery’s world-renowned, temporary exhibition programme showcases work by the finest contemporary artists working across a huge variety of media. The exhibitions have ranged from established practitioners such as Ellsworth Kelly, Louise Bourgeois, Bridget Riley and Cindy Sherman, to shows seminal in establishing artists’ reputations such as Damien Hirst, Cornelia Parker and Langlands & Bell.

Wellcome Collection: an exciting destination for explorers of the human condition. Wellcome Collection is a unique mix of galleries, events, and meeting, reading and eating places where you can consider what it mens to be human. It brings to life Sir Henry Wellcome’s vision of a place where people could learn more about the development of medicine through the ages and across cultures.  This impressive building in central London houses three exhibitions, the world-famous Wellcome Library, a cafe, bookshop, conference centre and members’ club.

The Estorick Collection of Modern Italian Art opened in London in 1998. Its new home – a Grade II listed Georgian building – was restored with support from the Heritage Lottery Fund and contains six galleries, an art library, cafe and bookshop. The Collection is known internationally for its core of Futurist works, as well as figurative art and sculpture dating from 1890 to the 1950s

Formed in April 2002, Hazlitt Holland-Hibbert is an independent association between the long-established St James’s art dealers Hazlitt Gooden and Fox, and James Holland-Hibbert.  With special emphasis on Modern British painting, drawing and sculpture, the gallery holds a selected stock of twentieth century examples ranging from the most representative work of the turn of the century to the more abstract examples of the post-war avant-garde.

The Courtauld Gallery’s permanent collection is one of the most important and best-loved in Britain. Famous for its outstanding Impressionist and Post-Impressionist paintings, the collection in fact reaches from the early Renaissance to Modernist works of the 20th century.  Located in Somerset House on the Strand, London WC2R 0RN

The Queen’s Gallery at Buckingham Palace is a permanent space dedicated to changing exhibitions of items from the Royal Collection, the wide-ranging collection of art and treasures held in trust by The Queen for the Nation. Constructed forty years ago on the west front of Buckingham Palace out of the bomb-damaged ruins of the former private chapel, the Gallery has recently been redeveloped. It was reopened by The Queen on 21 May 2002 and is now open to the public on a daily basis.

Tate Modern is truly a unique building. The gallery was created and is housed in a disused power station in 2000. This is Britain’s national gallery of international modern art/ of the 20th and 21st centuries, including masterpieces from Picasso and Matisse. It holds one of the world’s finest collections of Surrealism, including works by Dali, Magritte and Miró. You can also see Rothko, Giacometti, Lichenstein and Warhol.

Tate Britain is the national gallery of British art. The gallery displays the Tate Collection of British art dating from 1500 to the present day. From the Age of Elizabeth I, the work of Hogarth,, Gainsborough, Reynolds, Stubbs and the Pre-Raphaelite Brotherhood are major features of the collection. 2oth-century art includes Stanley Spencer, Barbara Hepworth, Francis Bacon and the Young British Artists (YBAs) of the 1990s. The latest contemporary artists is presented through the Art New Programme and the annual Turner Prize exhibition

Bankside Gallery is the home of the Royal Watercolour Society (RWS) and the Royal Society of Painter-Printmakers (RE). The gallery also has a changing programme of exhibitions of contemporary watercolours and original prints by Members of the two Societies.
November 12 -30 : The Poet and the Painter
December 4 – 31 : Mini Picture Show

The Antique Trader at The Millinery Works

Arts & Crafts Movement – Contemporary Art – Exhibitions -located in an ex-facotry in fashionable Islington, North London.
A delightful gallery with one of the largest displays of period Arts & Crafts furniture in the country that does not include any reproductions, supplying a world wide customer base.  Explore their website to see their current exhibition calendar and current stock.

The Royal Botanic Gardens, KEW,  is one of the world’s leading botanic gardens. Holding over 1 in 8 of known plant species, the gardens at Kew.  It is impossible to take in all of Kew’s 300 acres at once. The fascinating past of the Gardens is covered in the History and Heritage pages on the comprehensive website.

The National Portrait Gallery was formally established on 2 December 1856 with the criteria that the Gallery was to be about history, not about art, and about the status of the sitter, rather than the quality or character of a particular image considered as a work of art. This criterion is still used by the Gallery today when deciding which works enter the National Portrait Gallery’s collection. Located behind the National Gallery & Trafalgar Square.

The Hayward is the heart of the visual arts at Southbank Centre. In addition to putting on major exhibitions and commissioning new artworks in the gallery, The Hayward also organises projects, installations and talks. Check their website for current & future exhibitions.  Small cafe. Located on the South Bank of the Thames next to the London Eye. Next to Festival Hall & Queen Elizabeth Hall.

Dulwich Picture Gallery is one of the world’s most important collections of European old master paintings of the 1600s and 1700s. The gallery is one of the oldest in Great Britain and the paintings are housed in the first purpose-built art gallery in England, designed by Sir John Soane in 1811. Located in picturesque Dulwich Village in South London.

Three galleries open to the public seven days weekly – Free.  There is the Pearson Gallery, the Folio Society Gallery and Permanent exhibition in the Sir John Ritblat Gallery:Treasures of the British Library.

From acclaimed architects, to Turner prize-winning artists, Barbican Art Gallery presents major exhibitions by leading international figures in the heart of the City of London